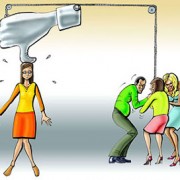 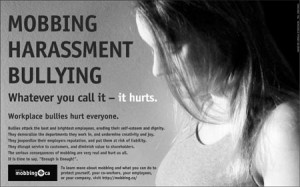 All these figures tell us that almost everyone is involved in the workplace deviance, either being a “performer”, or being a victime.

According to one of the pioneered researchers in this area, a Swedish scientist called Heninz Leymann, workplace mobbing is a type of bullying where more than one person commits egregious acts to control, harm and eliminate a targeted individual in the workplace. Mobbing is not personality conflit; rather, there is a particular vulnerability presented in the targeted individual.

In the book MOBBING: Emotional Abuse in the American Workplace, the authors say that mobbing is typically found in work environments that have poorly organized production and/or working methods and incapable or inattentive management and that mobbing victims are usually《exceptional individuals who demonstrated intelligence, competence, creativity, integrity, accomplishment and dedication. 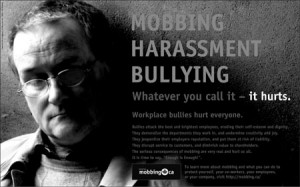 The causes of the workplace mobbing can be variant. Like what’s been quoted above, due to some poorly organized production and/or working methods; and especially when the management is incapable or inattentive to the actual status of the employees, for instance when a company is facing an economic crisis. At this point of time, if by performing “deviantly” upon their own actions towards the company (i.e., theft, fraud, vandalism, sabotage, absenteeism), they can’t obtain a certain kind of satisfaction in terms of company destruction, they may turn over to their colleges. Or, it’s also possible that the targeted individual of the mobbing is seen as a threat to be removed.

What’s important in reducing the workplace mobbing, and all kinds of workplace deviance behaviors, is to first of all establish an organizational justice system.
That is to say, procedural justice, distributive justice, and interactional justice.

More specifically, when it comes to mobbing, there are some tips that a manager can follow: 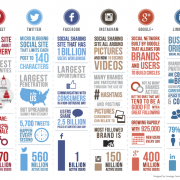